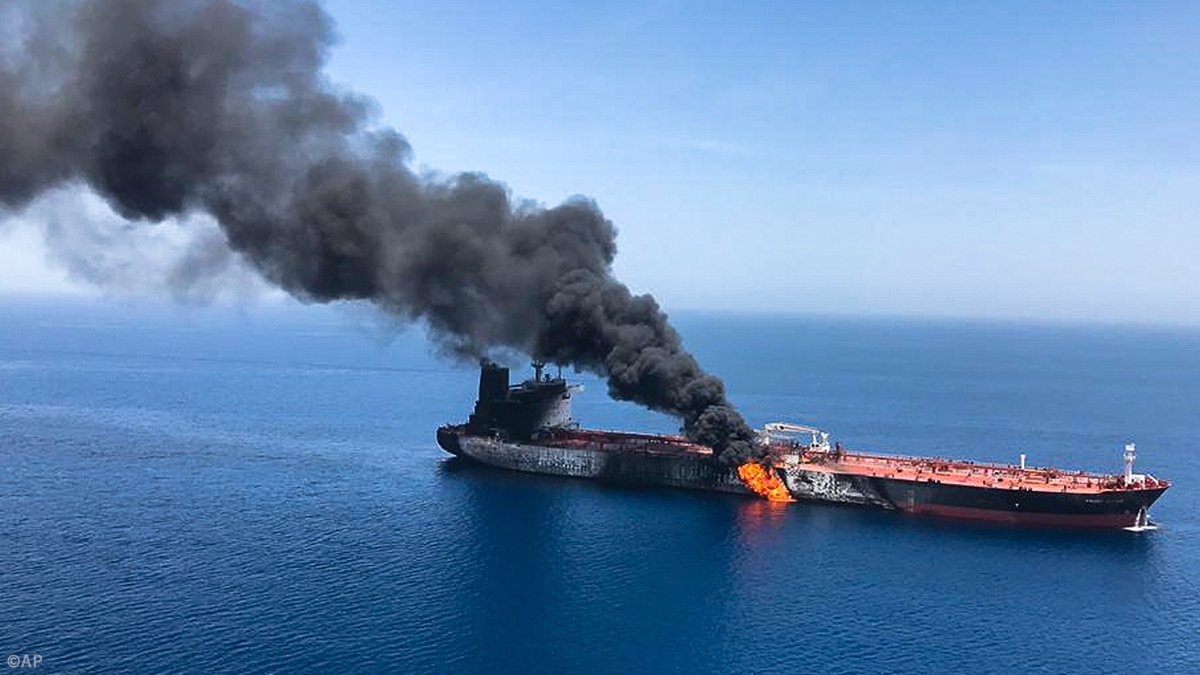 In our posting yesterday 13 June we referred briefly to the attack yesterday on two ships in the Gulf of Oman, and to the 12 May attack on four ships considered in our posting of 14 May. In that posting we listed possible culprits: Iran, the Houthis, IS, al-Qa’ida, or a false flag operation aimed at incriminating one of those or simply raising tension, in which case we listed as possible culprits the US, Saudi Arabia, the UAE or Israel.

A month later the first attacks remain a mystery. No one has claimed responsibility, and Iran has denied it, calling for dialogue to ease an “alarming security situation”. There is no obvious winner. Tension is high but these attacks made only a limited contribution to it. If for example the purpose was to demonstrate that Iran has the capability to close the Gulf (in which case the Houthi drone attacks on pumping stations on the trans-Arabian pipeline might be connected) it has not done so. Any effect on the oil price was insignificant. An investigation by the UAE, US and France concluded that limpet mines had probably been placed on the ships near the waterline, and that the sophistication of the operation showed that a “state actor” was the most likely culprit. Their report did not name the perpetrators, and nor did the UAE. The US accused the Iranian Revolutionary Guards of carrying out the attack using limpet mines. In a briefing on 24 May Vice-Admiral Michael Gildea, director of the US joint staff, said “we believe with a high degree of confidence that this stems back to the leadership of Iran at the highest levels and that all of the attacks that I mentioned have been attributed to Iran through their proxies or their forces”, but did not provide details or evidence. On 7 June the Saudi ambassador to the UN said “the responsibility lies on Iran”.

The second attacks took place in roughly the same area, in the Gulf of Oman outside the Straits of Hormuz, but apparently this time not in UAE territorial waters and only about 30 miles from the Iranian port town of Jask. Initial reports that one ship was struck by a torpedo and had sunk were not confirmed. Oil prices rose briefly by over 4%, but fell back.

The second attacks are different in two important respects. Two of the four ships in the first attacks were Saudi owned and one UAE owned (the fourth was Norwegian), but the two tankers in the second attack have no Middle East connection except that they were picking up cargoes from the Gulf – the Front Altair is Marshall Islands flagged and Norwegian owned and the Kokuka Courageous is Panama listed and Japanese owned. (The Japanese Prime Minister was visiting Iran at the time of the attack, seeking to ease tension between Tehran and Washington, and according to the Japanese trade minister both tankers were carrying “Japan-related” cargo.) Secondly the damage caused in the second attack was much more serious, with a much increased possibility of casualties, sinking, or an environmental disaster; one crew member was slightly injured, both ships were abandoned with one of them on fire, and both crews were rescued one by a US ship and the other by an Iranian ship.

As with the first attack, Mike Pompeo immediately accused Iran of responsibility “based on intelligence, the weapons used, the level of expertise needed to execute the operation, recent similar Iranian attacks on shipping, and the fact that no proxy group operating in the area has the resources and proficiency to act with such a high degree of sophistication.” An Iranian spokesman described the US accusations as “not only a joke and funny, but alarming and worrisome; “it’s so easy to accuse Iran… While the Japanese prime minister is visiting the Leader of the Islamic Republic of Iran to reduce tensions, which secret hands seek to influence these efforts in the region and who benefits from it?!” Senior US officials said the US was discussing with its allies options for protecting shipping in the Gulf of Oman, adding that the attack could have been an attempt to disrupt the Japanese Prime Minister’s visit.

This time by way of evidence the US military released a video which they said showed an Iranian Revolutionary Guard Gashti Class patrol boat removing an unexploded limpet mine from the Kokuka Courageous. The Japanese owner however has said that the claims of a mine attack are false and that crew members saw incoming projectiles before the explosion.