Summary: UN resolution 2624 offers some solutions but poses many challenges to bringing an end to the seemingly intractable war in Yemen.

We thank Helen Lackner for today’s article. She has worked in Yemen since the 1970s and lived there for nearly 15 years, and has written about the country’s political, social and economic issues. Helen works as a freelance rural development consultant. Her book Yemen in Crisis: the Road to War, published by Verso in 2019, is a seminal study of the current war and what lies behind it. Helen’s most recent Arab Digest podcast on the Yemen situation is available here.

Newly elected for a two-year term on the UN Security Council, the UAE promptly shocked the diplomatic world by abstaining on votes firstly condemning Russian intervention in Ukraine, and secondly referring the issue to the General Assembly in an obvious trade-off for Russian support to its lengthy and rambling 28 February resolution 2624 on Yemen.  Given that the UAE then voted against Russia at the UN General Assembly, one is left to wonder whether the Russians had expected a more principled position from a state which appears to be following Trump’s transactional approach to diplomacy. 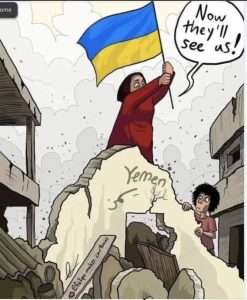 Normally a routine event, the renewal of the arms embargo and sanctions against the Houthis, thanks to UAE initiative this year witnessed significant changes whose impact on the UN’s peace-making efforts in Yemen are double edged for all concerned parties. In addition to using terminology such as “heinous terrorist” with respect to the January strikes on Abu Dhabi, resolution 2624’s language clearly lacked quality copy-editing, for example stating “other sites” with reference to Houthi attacks on Saudi Arabia, could be read as meaning that Saudi Arabia is part of the UAE! Similarly referring to “refugee camps” instead of internally displaced camps, and to famine when the UN has not declared one demonstrate careless drafting, leaving observers to wonder about the role of the UK, the official pen holder on Yemen at the UNSC. The UAE itself could also be considered the target for some of the actions condemned by the resolution, such as “acts of violence to achieve political goals”, “threat posed to civilians by explosive remnants of war” and “sexual and gender-based violence…. in detention facilities.” Similarity, its appeal for parties to “ensure accountability for violations of international humanitarian law and violations and abuses of human rights in Yemen” are equally relevant to the numerous breaches of international law committed by the Saudi-led coalition, in which the UAE is a senior partner. For human rights organisations, these are particularly sensitive issues given Saudi success in closing down the UN’s Human Rights Group of Eminent Experts last October.

Resolution 2624 introduces elements welcome to many Yemeni groups and organisations currently excluded from formal negotiations by Resolution 2216 (2015), although these will be problematic. It will be extremely unwelcome by Hadi’s internationally recognised government [IRG] and by the Houthi movement. For the UN Special Envoy Hans Grundberg this resolution has both positive and negative implications.

The resolution’s three main innovations are first the use of the term “terrorist” to describe the Houthi movement which, although of no international legal validity, will encourage the UAE and others to push for such a description internationally and will simultaneously ensure further hostility to the UN in the Houthi leadership.  The second is the inclusion of the entire Houthi movement, or Ansar Allah, as the entity to be embargoed, rather than the specific individuals mentioned in earlier resolutions, something which is unlikely to produce significant changes on the ground. Third, and more significantly, there are important implications for future negotiations of its explicit expansion of proposed negotiating partners to “the multiple and varied parties including but not limited to the Government of Yemen and the Houthis, Yemen’s major political and regional parties, and women, youth and civil society” [article 3.] While the IRG and other anti-Houthis have publicly praised the first element, the third will certainly raise objections from the IRG, the separatist Southern Transitional Council (STC) and possibly even the Houthis, as well as causing confusion among the Yemeni entities competing to have their voices heard in negotiations.

As for Special Envoy Grundberg, the inclusion of the term terrorist in the resolution will further complicate his relationship with the Houthi leadership whose refusal to invite him to Sana’a is becoming an embarrassment. This resolution will cause additional delay and difficulties. On the other hand, regardless of the opposition of the IRG, he will welcome the fact that it enables him to include forces other than the Houthis and IRG among his UN-recognised interlocutors, despite the complications this necessarily implies.

As has been the case for years, calls for the involvement in negotiations of women, civil society and youth are largely rhetorical appeals whose implementation raises endless issues:  aren’t women (50% of the population) and youth (70% of the population under 25) members of political organisations? Civil society includes everything from the local football clubs to the Mwatana Human Rights organisation, and many of those with political objectives are aligned with every existing political tendency. The solution is obviously to ensure that each delegation includes at least 30% women and that half its members should be under 40 [the official end of ‘youth’ in Yemeni official terminology], something which political entities have resisted to date.

More problematic is that of political party representation. Other than the Houthis (Ansar Allah), Yemeni political parties are divided along numerous lines including administrative, current location and allegiances. Some of them are effectively irrelevant, given their lack of popular support and thus representativity. Regionally the resolution implicitly recognises the relevance of other regional movements, such as those in Tihama, and Hadhramaut in the South. These will all complicate Grundberg’s efforts to form a negotiation team.

For the STC, this resolution presents numerous threats, first the introduction “reaffirming its strong commitment to the unity, sovereignty, independence and territorial integrity of Yemen.” The call for representation of regional parties defeats its earlier achievement of being the only entity entitled to join the IRG in negotiations, opening the door to others, such as Hadhramaut. Second the demand to implement the 2019 Riyadh agreement adds to pressure towards reconciliation with the IRG. Recent STC attacks on the premises of the General People’s Congress (GPC) in Aden equated Tareq Saleh’s political bureau with the GPC as a party, ignoring the GPC’s strong presence in the south let alone its numerous factions, including the fact that President Hadi and most of the IRG are GPC leaders.

While the war on the ground and the humanitarian suffering chugs along without major developments in recent weeks, this UNSC resolution provides both openings and creates major issues, which the UAE may not have intended!

Summary: Morocco implements new legislation regarding the production and sale of cannabis but full decriminalisation is still a long way off.