Summary: the Hajj, supposedly the journey of a lifetime, is proving once again to be unforgettable for all the wrong reasons.

Eid celebrations in Saudi Arabia began on Saturday, the tenth day of the Islamic month Dhu Al Hijjah. This important date in the Islamic calendar marks the pilgrimage of Muslims from across the world to Saudi Arabia to perform Hajj, the fifth pillar of Islam, on which Arab Digest has often reported in the past.

One might be forgiven for assuming that since the Saudis have been running the Hajj since 1932 it would by now be run like a well-oiled machine. After all, with 349 days each lunar year to prepare, boundless wealth, and the brightest brains from across the Muslim world at their disposal offering assistance, they have all the necessary resources. Compared to, say, hosting a World Cup or the Olympics, it presents a much less complex challenge. Mina, Arafat and the area around Mecca where religious activity is conducted is largely open desert so there should be no need, for example, to have to demolish property in order to build special infrastructure.

Despite this the Hajj has been plagued by mass fatality incidents, including stampedes and in 2015 a construction crane collapse. After some of the worst disasters, the government established committees of investigation but no results are ever published or action taken. If anything, God’s will is found to be the cause. By way of explanation the regime often points to the vast numbers who normally attend – up to 3 million for the Hajj and as many as 15 million for Hajj and Umra together. When one considers that 1.1 million commuters travel in and out of central London each day without serious issue and similar numbers in other major cities this is hardly a convincing argument.

This year’s Hajj has been billed as the biggest since the coronavirus pandemic began. One million fully vaccinated Muslims, including 850,000 from abroad, are being allowed to participate, a major break from the last two years when numbers were drastically curtailed due to the pandemic.

So far the main issue this year has been problems arising from haphazard last-minute changes to the Hajj booking system. Last month the Saudis unleashed havoc when they announced all pilgrims including Westerners must now apply for a place on the Hajj through the central government Motawif website. The new scheme, which effectively scraps the decades-long role of travel agencies in the process, means the “winners”, who are selected by an “automated lottery”, then book and purchase their transport and accommodation directly from the Saudi government. Anyone who had already booked their Hajj package from another company has been advised to seek a refund.

“It’s completely devastated the whole market, not just from the travel agents’ point of view, but for the pilgrims,” one Hajj travel agent in Australia said. “So it’s just a complete mess, to be totally frank with you.”

Pilgrims who have managed to make bookings report price hikes of thousands of dollars, with extortionate extra-fees at every stage, as well as concerns over payments and data protection. The “automated lottery” system crashed immediately after it launched and Hajjees who did manage to sign up reported receiving spam emails soon afterwards. The company processing the applications has at least one investor with close ties to India’s government which is known for anti-Muslim policies. 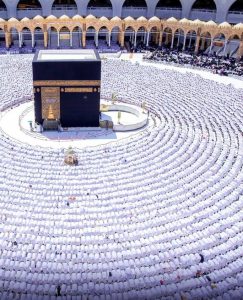 Meanwhile Western pilgrims arriving in Mecca have been posting about the “madhouse” they encountered on arrival, hotels that had “run out of rooms”; people “crying in the hotel lobby”. Some were given keys to rooms already occupied by other guests. One female pilgrim on a platinum package with her husband said she was assigned a room with a “random bloke”.

Other popular talking points this year have been how easily Israelis can now visit the Kingdom when entry for Muslims remains restricted (under the national quota system, imposed by agreement at the Organisation of the Islamic Cooperation in 1987) as well as the controversial Saudi cleric chosen to give this year’s Arafat Day sermon. Sheikh Dr. Mohammed bin Abdul Karim Al-Issa, secretary-general of the Muslim World League, is the regime’s favoured Islamic scholar but many view him as a traitorous Zionist, while the most popular Sunni preachers in the Arab world, if not already in Saudi prisons, cannot safely enter the Kingdom for fear of arrest.

Besides making as much money as possible, the regime’s priority at the Hajj is to serve its many special guests, including international media representatives, while always maintaining a tight lid on security. Contrary to the fundamental principle of an egalitarian pilgrimage,  regime members’ guests enjoy a five-star “motorcade Hajj” with exclusive access to the holy sites. Roads, bridges, entries and exits are cordoned off for royal family use, further choking a network that is already gridlocked by crowds of pilgrims and the dozens of checkpoints erected by the Mabahith, the secret police, to make sure they do not stray.

The Saudis are extremely sensitive about how the Hajj is reported in international media and media messages surrounding the event are always tightly controlled. Saudi controlled media always strives to present it as a tremendous success and bad news is never confirmed until irrevocable evidence has already leaked. Foreign correspondents are carefully vetted before selection but then receive red carpet treatment on arrival while always remaining under surveillance. Any kompromat is collected and bribes are offered.

Lying on the route between Damascus and Aden, thus between the Mediterranean and the Indian Ocean, Mecca has always been an important trading centre. Mecca, the Ka’ba (cubical stone building), and the Black Stone inside it were a pilgrimage centre before Islam. Historically the Hajj was not just a carefully orchestrated sequence of religious movements as it is today. It meant taking part in a rich cultural and intellectual exchange with Muslims from across the world. Under the Saudis this all stopped years ago. The regime is determined not just that the Hajj passes without controversy but that no political activity of any kind takes place. The Mabahith are everywhere, infiltrating the crowds to prevent any gatherings, demonstrations or speeches and visiting Muslim leaders are often targeted for arrest, either at the regime’s own initiative or the behest of an ally.

Last month human rights defenders and activists launched an electronic campaign entitled #الحج_ليس_آمنا (#HajjIsNotSafe) which collates information on security problems on the pilgrimage. This would include four Libyan leaders from Zawia arrested in 2017, whose fate is unclear, and at least six Uyghurs who were deported back to China in the past four years. Two more Uyghurs are currently in al-Dhahban Mabahith prison north of Jeddah awaiting rendition. Last week a Sheikh on the Syrian Islamic Council, the chief Syrian opposition Sunni religious authority was arrested in the Grand Mosque, together with a companion.

Ultimately, despite the many benefits it brings, the Hajj has always been the easiest way for foreigners to penetrate the Kingdom and so the regime regards it as a security threat. This is why for more than thirty years the Head of the Supreme Hajj Committee was the hardline Interior Minister Prince Nayef bin Abdulaziz and the Minister of Hajj his subordinate, just managing day-to-day practicalities. Although administering the Hajj is always held up by the Saudi government as a high duty and the King’s preferred title is Guardian of the Holy Places in fact the regime takes on the mantle rather unwillingly and with a view to squeezing as much money from pilgrims as it can.

Summary: the fighting in Libya may have all but ended in 2022 but that may be the calm before a coming storm as contestation grows…

Summary: the fighting may have all but ended in 2022 but that may be the calm before a coming storm as Washington prepares to challenge…