Summary: On the one year anniversary of the Beirut port explosion, no conclusions have been reached as to what caused it but an Arab Digest member who witnessed the explosion believes that both the Israelis and Hezbollah are to blame. Meanwhile a significant detail has emerged about the amount of ammonium nitrate stored in the port at the time of the blast.

Today marks the one year anniversary of the explosion that destroyed the Beirut port. Thousands of Beirutis are marching to the port in memory of the victims and in peaceful protest at continued government inaction. As Lebanon wrestles with political paralysis, a rampant pandemic and a wrecked economy the authorities still have provided no answers and no one in a senior position has been held accountable for the blast.
Last Friday Reuters published an article confirming an FBI report (from 7 October 2020) that the amount of ammonium nitrate left in the warehouse by the time of the explosion was substantially less than the more than 2500 tonnes seized by the authorities in 2013, but a question the FBI did not ask was where the bulk had gone. Our report from 20 July which we are republishing today (see below) offers the likely destination: the regime forces of Syria’s president Bashar al-Assad. Assad’s ally Hezbollah moved the ammonium nitrate into Syria over several years, sources say. Buttressing our analysis is the fact that from the supposed destination, Mozambique, no insurance claim has ever emerged for the undelivered fertilizer. The Israelis, we postulate, in hitting a Hezbollah weapons cache in the harbour unintentionally triggered the blast that wrecked the port.
A new investigation published by Human Rights Watch yesterday links to over 100 documents related to the Rhosus and its cargo, some of which have not been previously published. Once again, more questions than answers are forthcoming, including over such key issues as whether the ammonium nitrate was really ever, as has been asserted, intended for Mozambique.
The widely reported narrative regarding the arrival of the Rhosus, a Moldovan-flagged ship, in the port of Beirut in November 2013 carrying 2,750 tonnes of high-density ammonium nitrate is as follows: the ship’s cargo was ultimately bound for Mozambique; it entered Beirut’s port to load seismic equipment it was then meant to deliver to Jordan before traveling onward to Mozambique; the ship’s owner was a Russian national, Igor Grechushkin; and the owner of the ammonium nitrate on board, Savaro Limited, was a chemical trading company in the United Kingdom. Upon examination, however, it is not clear that any of these assertions are true.
The HRW report goes on to mention three possible reasons for the blast: that the explosion was caused when welding sparks caused a fire in hangar 12, igniting the ammonium nitrate; that the explosion was caused by an Israeli airstrike; or that the explosion was an intentional act by Hezbollah. The hypothesis that the explosion might have been caused by an Israeli attack that was not an airstrike is not one that is under official consideration, although in June investigative Judge Tarek Bitar told journalists that he was “80 percent certain” that the explosion was not caused by an Israeli missile. 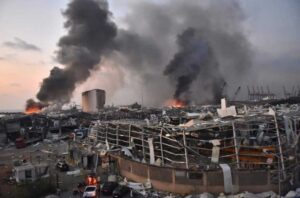 When we launched the podcast in March 2020 we had no idea what sort of reception to expect. Now nearly 120 podcasts later we are…