Summary: while scientists around the world rush to assess the impact of the emerging Omicron variant, much of the Middle East is at a worrying threat threshold.

As Omicron anxieties grow at least one MENA country, the United Arab Emirates, can take comfort that the waves now threatening to crash into other economies are little more than ripples, at least for the time being. Indeed, using a sports analogy Bloomberg designated the UAE as one of just 7 countries – the others being Norway, Finland, Denmark, Canada, South Korea and Switzerland – an MVP (Most Valuable Player).

Whether rolling out vaccines, fighting delta or reopening the economy, they always scored above average. Strong healthcare safety nets and societal cohesion are common denominators among the seven, qualities that advantaged them at every stage of the pandemic.

Bloomberg noted further that the seven had wide support from their citizens in following pandemic rules plus the wealth to quickly acquire vaccines. Granted the article was published two days before WHO named the emerging variant Omicron. Still the research that is emerging is showing that those countries with high vaccine penetration are, to continue the sports analogy, best able to handle the Omicron curve ball. 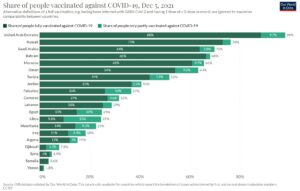 And the UAE is top of the global table when it comes to vaccinations. As of 15 November, the country had more than 98% of its population with at least one vaccine and nearly 90% with two. By way of comparison, the UK figures are, respectively, 75% and 68% and for Saudi Arabia it is 70% and 64%.

The UAE’s Minister of State for Foreign Trade and Minister in charge of Talent Attraction and Retention Dr Thani bin Ahmed al-Zeyoudi, in a recent interview with Arabian Business (subscription paywall) made the point that the country’s pandemic approach is working. As he put it “the way that we have handled the pandemic (has) ensured that there is a smooth re-opening of our economy to the globe.”

Thus far Expo 2020, delayed by Covid before opening in October has attracted more than two million visitors. It has, the minister says  “(brought) a lot of traffic to the country, but it’s also bringing a lot of investments, potential collaborations, cultural and traditional engagements and partnerships with the rest of the world.”

Using Expo as one of its platforms, the UAE is aggressively pursuing Comprehensive Economic Partnership Agreements (CEPA), one step above free trade deals as it seeks to double its economy in the next ten years. Still, hanging over the UAE’s boldly optimistic approach is the impact of Covid in China. How the world’s second-largest economy goes will have a significant impact on the UAE’s ambitions. And right now the news is not good. The Chinese government is attempting to handle the pandemic with a “zero-Covid”policy with its attendant severe economic consequences. And it is wrestling with a huge property debt crisis centred around Evergrande. Economic growth is running at 5% a figure that as The Economist notes: “Barring the brief shock when the pandemic began, is the lowest for about 30 years.” The danger is that a badly damaged Chinese economy will drag the rest of the world down with it, including the UAE’s vaunted hopes.

And though the Emiratis are in good shape vis a vis the pandemic the same cannot be said for much of the Arab world. A brief scan of the data shows a startling and disturbing picture. Egypt, where Omicron is now spreading has a double vaccination rate of just over 10%. Lebanon, already crippled by corruption and government paralysis has barely 25% of its population with two vaccines. Tunisia at 44% and Morocco at 61% are in better shape but tourism which is a significant part of both countries’ economies remains heavily damaged and Omicron will only inflict more harm. Mauritania sits at just above 14% while figures for Sudan were unavailable.

Most of these countries have highly stressed health-care systems barely able to cope – or in some cases not coping at all – with previous waves of the pandemic. While scientists assess both the lethality and transmissibility of Omicron the MENA region faces a challenging and uncertain few months as the Covid wars continue.

Author and analyst Matthew Hedges is this week's podcast guest as he joins Arab Digest editor William Law to discuss his recently published book, an…