Summary: a new examination of the environmental efforts of Gulf hydrocarbons producers shows that behind the talk of a green agenda there is little of substance to stand up their claims to be onside with the struggle to save the world from environmental destruction.

We thank Helen Lackner for today’s article, a review of Political Power and Environmental Sustainability in Gulf Monarchies by Tobias Zumbraegel (Palgrave Macmillan, 2022, 278 pp.) A Yemen expert, Helen works as a freelance rural development consultant and is a visiting fellow at the European Council for Foreign Relations. She is the author of Yemen in Crisis, the Road to War published by Verso, a seminal study of the current war and what lies behind it; a revised edition with additional material is coming out shortly. In July 2022 Routledge published her new study Yemen: Poverty and Conflict. Helen’s most recent Arab Digest podcast is available here.

As Egypt closed its COP27 theatre and Abu Dhabi prepares for its own COP28 performance in 2023, a detailed review and analysis of GCC state policies and actions on the environment is most timely. Although it retains some of the standard features of a doctoral thesis, Political Power and Environmental Sustainability in Gulf Monarchies is clear and readable and provides a comprehensive analysis of how the Gulf states’ environmental policies and actions fit into their overall political ambitions and rivalries. While remaining systematic and objective, the book reveals the extent to which these regimes use their wealth and influence and the national and international media they own to present themselves as environmentally friendly actors. 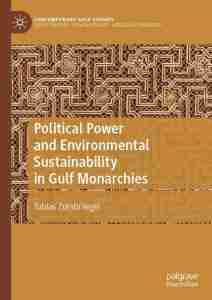 For those who wonder how a state with such a negative environmental footprint as the UAE could be invited to host a COP conference, the book provides no direct answer, but the details of the mechanisms used by all the GCC states, and Saudi Arabia in particular, to undermine environmental objectives internationally and in earlier COPs are discussed in some detail. In particular, alongside the interventions by the main international fossil fuel companies, these efforts have, unfortunately, been successful in enabling gas and nuclear energy to be largely accepted by many states and international organisations as ‘green’ sources of energy while at the same time preventing effective international action against fossil fuels.

Starting with a brief but very useful analysis of the different states’ development policies in recent decades Zumbraegel, a researcher at the German think tank CARPO, points out that rivalry and competition between the main GCC countries is a major factor underlying their politics. He illustrates his argument with details of their environmental policies, focusing on their highly wasteful energy strategies alongside their  extravagant use of water. Among other points he reminds readers that Saudi Arabia’s use of its fossil water sources enabled it to be the world’s sixth largest wheat exporter in the 1980s. The details of the evolution of these states’ environmental policies focuses on the priority given to hydrocarbon companies and their concomitant neglect of issues of long-term environmental sustainability.

Any environmental action that has been undertaken is partly motivated by a growing awareness of the threat of global warming to the very possibility of life in the Arabian Peninsula. Regardless, the monarchies still prioritise the demands of their ‘state capitalists’ and of hydrocarbon-led institutions over policies which would enable long-term sustainability. As a result, environmental interventions have been ineffective as each state has created numerous, overlapping and weak environmentally related institutions. Zumbraegel explains one mechanism used by the GCC states to support their ‘green’ claims has been purported support for “environmental sustainability and the green energy transition… as this field provides new business opportunities and monetary incentives…. These commercial interests focus almost exclusively on innovation, technology and energy, leaving out environmental concerns.”

He shows how a range of rivalries played a far more decisive role on decisions about institutions and policies than environmental considerations. Internal rivalries between ruling factions, he notes, have been one factor affecting the weakness of environmental institutions. The author gives examples of how each new ruler proceeded to establish institutions competing with those of his predecessor. This is particularly true of Saudi Arabia, leading to a situation where “in the last year of King Abdullah’s rule in 2014, there were over 16 formal entities engaged with environmental issues and each had its own plans and programmes.” Institutions responsible for environmental issues duplicated each other while the low priority they were assigned ensured they were kept ineffectual.

Zumbraegel provides a helpful and detailed list of each state’s environmental policies and institutions, their plans and frequently profligate projects. Although these details do not make for exciting reading, they are extremely important in providing readers with the base on which to assess past, present and future results. The book then proceeds to compare actual achievements to date with the original claims, demonstrating their environmental mediocrity by comparison with the real impact of enriching private companies closely associated with the rulers through an oligarchic pact and what the author calls “adaptive state capitalism.”

Competition among the leading hydrocarbons states has been another key factor. The book confirms that rivalry between the UAE and Saudi Arabia is already active and relevant on environmental issues, both with respect to competing institutions and ambitions within each state and to their investments in other Gulf states and beyond.

In conclusion, the author reminds readers that the GCC states have, in the past been “regularly criticised for their high emissions and extravagant lifestyles,” having already noted their efforts at “revamping their hitherto image as some of the world’s worst polluters.” However, as Zumbraegel points out “these countries remain far away from their self-description as green advocates… flattering appraisal from outside the region that a ‘green revolution’ is taking place in the Gulf is also misleading.” His data demonstrates that, while talking a green agenda, the states have raised their production of fossil fuels.

Zumbraegel quotes the Saudi oil minister’s statement in 2017 that “the last barrel that gets produced globally is going to be here in Saudi Arabia” as a more accurate reflection of GCC state policies about the environment than the multiplicity of ‘environmentally friendly’ institutions and ambitious projects each of them has publicised in recent years.

Political Power and Environmental Sustainability in Gulf Monarchies is a thoughtful political analysis of the contemporary GCC through the lens of the environmental policies and practices of the member states. Zumbraegel argues to good effect that environmental sustainability is not the priority of these regimes. Rather environmental issues are used to improve their image through highly developed public relations exercises and the promotion of extravagant and most likely unrealistic projects such as Mohammed bin Salman’s US$500 billion AI city NEOM. Behind the PR wall, the real objectives involve capital accumulation for national companies including the private sector, possibly in anticipation of an end to the hydrocarbon boom.

The actions of the Gulf hydrocarbons states show that quick profits and the search for hegemony within the region and beyond are clearly more important for the rulers than the introduction of effective environmentally sustainable policies.  Not only are the environmental policies overly ambitious and on a scale reminiscent of fiction, but the actual implementation is insignificant partly due to the political weakness of their environmental institutions. In a situation where quick profits are a priority and political power remains with the much more powerful fossil fuel institutions and the ruling families behind them, that is, as Zumbraegel clearly argues, a deliberate weakness.

Summary: Gulf states are making deals with the king of crypto as they compete to establish global dominance of a market that with the collapse…