Summary: the description of Israel as an apartheid state has stirred an angry reaction within the country and among its international supporters but there is much in the Amnesty report that deserves consideration.

Yesterday Amnesty International published a 211 page report that unequivocally declared Israel’s treatment of the Palestinians to be a campaign of apartheid and “a cruel system of domination and crime against humanity.”

The response inside and outside Israel was visceral in its anger even before the report was released.  The Israeli Foreign Ministry on 31 January declared it “false, biased, and anti-Semitic,” adding “Amnesty’s report effectively serves as a green light… to harm not only Israel, but Jews around the world.”  The foreign minister Yair Lapid declared “(Amnesty) isn’t a human rights organization, but just another radical organization which echoes propaganda without seriously checking the facts. Instead of seeking the truth, Amnesty echoes the same lies shared by terrorist organizations.”

US Jewish organisations swung into action too. In a joint statement issued on Sunday the American Israel Public Affairs Committee, the Anti-Defamation League, American Jewish Committee, B’nai B’rith International and the Jewish Federations of North America decried what it called a “biased and one-sided report (that) inexplicably focuses on one aim: to demonize and delegitimize the Jewish and democratic State of Israel.”

The Board of Deputies of British Jews tweeted a statement that read in part: “The emotive term ‘apartheid’ is a preposterous slur.  Israel is a vibrant democracy and a state for all its citizens, as exemplified by its diverse government and robust civil society.” 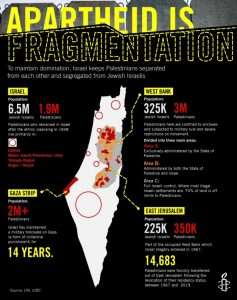 The Amnesty report seeks to link the universally accepted definition of apartheid, “an institutionalized regime of oppression and domination by one racial group over another,” with Israel’s treatment of Palestinians. Amnesty argues that such treatment is a violation of international law and a crime against humanity as set out in the Apartheid Convention and the Rome Statute and “include unlawful killing, torture, forcible transfer, and the denial of basic rights and freedoms.”

With that definition in hand, the report forensically examines the treatment of Palestinians over decades in the Occupied Palestine Territories (OPT), Gaza and Israel. Categories include Segregation and Control, Dispossession of Land and Property, Deprivation of Economic and Social Rights, Forcible Transfer, Administrative Detention and Torture, Unlawful Killings and the Denial of Basic Rights and Freedoms.

Section 5.1 considers Israeli government policy that since the country’s inception in 1948 has sought to insure a “Jewish demographic hegemony.”

The demography of the newly created state was to be changed to the benefit of Jewish Israelis, while Palestinians – whether inside Israel or, later on, in the OPT – were perceived as a threat to establishing and maintaining a Jewish majority, and as a result were to be expelled, fragmented, segregated, controlled, dispossessed of their land and property and deprived of their economic and social rights.

One of many examples it cites of this policy is the passage in 2018 of the Basic Law which decreed Israel the nation state of the Jewish people. The law, it notes in one example, was used to deny the establishment of an Arabic school for Israeli-Palestinian citizens living in the town of Karmiel on the grounds it would undermine the town’s Jewish character.

The strength of the report  – and the reason perhaps that the Israeli government, pro-Israeli lobbies and  other Jewish organisations have reacted with such anger – lies in the use of the words from politicians themselves to buttress the central argument that the state practices apartheid. Thus it quotes then Prime Minister Benjamin Netanyahu posting a message on Instagram in March 2019 that “Israel is not a state of all its citizens” but rather “the nation-state of the Jewish people and only them.”

It quotes the former mayor of Jerusalem Teddy Kollek who when he was in office said this in 1990:

For Jewish Jerusalem, I did something in the past twenty-five years. For East Jerusalem? Nothing! What did I do? Nothing. Sidewalks? Nothing. Cultural institutions? Not one. Yes, we installed a sewerage system for them and improved the water supply. Do you know why? Do you think it was for their good, for their welfare? Forget it! There were some cases of cholera there, and the Jews were afraid that they would catch it, so we installed sewerage and a water system against cholera.

Amnesty comments at length on unlawful killings.  One not mentioned was the very recent death of an 80-year old American-Palestinian Omar Abdalmajeed As’ad. He was pulled from his car, beaten, handcuffed, blindfolded, gagged, forced to the ground and left to die by soldiers of the Netzah Yehuda Battalion, already notorious for abusing detainees. Washington demanded answers for the death of a citizen.  The IDF responded calling the incident a “moral failure and a failure of judgement.” According to Haaretz the Netzah commander will be rebuked and two subordinates dismissed but no further action will be taken and the soldiers involved will not be held responsible for Omar As’ad’s death.

Nor, one suspects, will the young settlers who attacked Palestinians planting olive trees on 21 January with stones and clubs. The video, widely circulated, shows a car being set ablaze and the youths, faces concealed with balaclavas, beating people and hurling heavy stones.

It is actions like these that bring shame to Israel. As Crispin Blunt said in our 31 December podcast: “at the heart of this is a searing injustice and a growing embarrassment about Israeli policy and the consequences of it for others. And this does not reflect well, inevitably, on those people who would otherwise be very sympathetic to the State of Israel.”

The comfortable assumption that Israel is a vibrant democracy does not jibe with the facts on the ground. And while the description of the state and its policies as apartheid is harsh it is not, on balance, unfair. Rather than describing Amnesty as a propagandist for terror organisations and the report as a slur and anti-Semitic, Israel and its supporters must see the treatment of its Arab subjects for what it is: abusive and grossly unjust. Israel is neither a state for all its citizens, nor for Palestinians excluded from citizenship and the exercise of their rights.

Summary: with the appointment of the boss of the UAE’s national oil company to head up COP28, critics say it’s a sell out to big…