Summary: the war in Ukraine presents Algeria with a unique opportunity to exploit its gas reserves as Europe scrambles to ease its dependency on Russian hydrocarbons.

We thank Francis Ghilès for today’s article. Francis is a  specialist on security, energy, and political trends in North Africa and the Western Mediterranean and  an associate senior researcher at the Barcelona Centre for International Affairs (CIDOB.) From 1981 to 1995 he was the North Africa correspondent for the Financial Times and has written for numerous publications including the New York Times, Wall Street Journal, Le Monde, El Pais and Middle East Eye.  He is a regular contributor to the Arab Digest newsletter and podcasts. You can find his most recent podcast “Macron’s missteps in North Africa” here.

As Europe scrambles to diversify its foreign suppliers of gas, many countries join the list of potential partners: from the heavyweights like Australia, Qatar and the US, to other important players such as Azerbaijan, Egypt, Libya and Algeria. The last mentioned’s potential role is enhanced by the existence of three underwater gas pipelines which already link it to the Iberian Peninsula and Italy. At least two of these, the Pedro Duran Farell, linking Algeria to Spain and Portugal via Morocco (closed since 1 November because of growing tensions between Algeria and Morocco) and the Enrico Mattei linking Algeria to Italy via Tunisia are under-utilised. This pipeline, also known as the TransMed carries 22bcm (billion cubic metres) per annum, thirty per cent below its real capacity. The Medgas pipeline which links Algeria directly to Spain carries 8 bcm per annum. 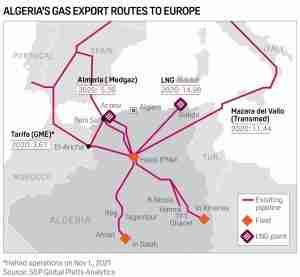 If, in the months and years ahead, the European Union turns to Algeria, among other foreign suppliers to buy more gas, three questions need answering:

To the first question: Algeria has been exporting gas since 1964 and has always respected its contracts scrupulously. Liquefied Natural Gas was invented in Algeria by Shell between 1961 and 1964 when the first Algerian shipment of LNG travelled to the UK. More than half a century later, Algeria’s state oil and gas company Sonatrach sells gas to Greece, Turkey, Italy, France, the UK and Belgium. For the first time since it walked away from LNG contracts it had signed with Sonatrach in 1978 – for reasons unknown to the Algerian negotiators to this day – Germany is showing interest in Algerian gas. Neither commercial disputes which have gone to international arbitration nor civil war in the 1990s have dented Sonatrach’s reliability.

To the second: knowing the exact volumes of oil and gas reserves of any country is difficult enough. What we do know is that at least half the landmass of Africa’s largest country has never been explored; that some areas have been explored years ago and that more modern techniques could well increase the figures of proven reserves. Algeria also boasts the third largest reserves of unconventional gas in the world (25,000bcm), ex-aequo with Argentina.

The key question today is the third one. Sonatrach’s production of gas – for domestic and foreign sale – has declined from 95.898 bcm in 2018 to 85.119 bcm in 2020. The outline of the problem is clear. Current gas production is divided into three almost equal parts: consumption, export and reinjection, mainly supported by the Hassi R’Mel field. Its current rate of production cannot be maintained beyond 2028 and will become insignificant as from 2040. Production from fields currently being brought into production will not be enough to make up for the expected drop in output at Hassi R’Mel.

The need to increase production is pressing. It was addressed by the 2019 Hydrocarbons Law (Law 19-123, adopted in December 2019) which makes it much more attractive for international companies to invest in Algerian oil and gas fields and in exploration of new fields. The contract signed between Italy’s Ente Nazionale Idrocarburi (ENI) and Sonatrach last December is important for three reasons: it is the first since the passing of the new law with the two signatories having a longstanding and broad cooperation; it provides for fast-track development with a view to rapid production; finally the two companies are assessing joint opportunities in such areas as renewables involving green and blue hydrogen etc. ENI and Sonatrach announced earlier in March an important new find of crude oil and associated gas and the Italian company’s ambition in Algeria also includes buying up BP’s assets in that country.

The other side of the Algerian equation is domestic consumption which is rising fast because consumers have no incentive to seek savings. As Petrostrategies pointed out a year ago (“Algeria risks having to stop its gas exports around 2030 if it fails to act very quickly upstream”, 26 April 2021) the efficiency rate of its old power plants is very low (around 36%) and grid losses are very high (13.5% on average) but neither Sonelgaz (which has a monopoly on the production and sale of electricity) nor consumers have any incentives to seek savings. Gas is supplied to Sonelgaz at a “ridiculously low price of less than $0.30/MMbtu, probably the lowest in the world”. It does not even cover Sonatrach’s production costs. The average consumer price of electricity is only $0.03 kWh, excluding taxes. Many in Algiers view such a policy as the height of economic absurdity as it encourages huge wastage. Industrial users, including joint ventures with foreign companies such as cement makers Lafarge enjoy prices that offer opportunities to make huge, not to say unwarranted, profits.

The government backed by the generals puts off increasing prices for fear of social unrest. The truth of the matter is that senior army brass know that the population views its rule as illegitimate. However, changed geopolitical circumstances offer the Algerian leadership an opportunity of rewriting its future and that of the country. Meaningful engagement of numerous talented economists and managers, whose knowledge of the world is currently ignored could help draft an economic blueprint commensurate with the formidable challenges thrown up by the war in Ukraine. Until the military accept that Algeria’s strength cannot rest solely on sophisticated weaponry but needs a diverse, thriving and freer economy, the absurd energy policy equation that afflicts Algeria will persist.

Breaking with past practises is prerequisite if Algeria wishes to raise its gas game with Europe and invigorate this key sector of the economy which employs over 100,000 people, provides 98% of Algeria’s foreign income and 60% of its budget receipts.

Which country might become the future southern European hub for gas?

Spain aspires to the pole position but faces numerous challenges including  likely French resistance to the trans-Pyrenees pipeline being expanded, something which the nuclear industry in France has resisted for two decades. As well Spain would have to be in a position to import more gas from Algeria, which looks unlikely as, earlier in March, the country’s relationship with its biggest gas supplier was strained when Madrid unexpectedly backed the claims of Morocco to the disputed Western Sahara region.

Following the Spanish tilt, President Abdelmajid Tebboune made clear Algeria would work closely with its traditional friend Italy, by far its biggest buyer of gas. Sonatrach has already been supplying, since December 2021, 2-3M/btu of gas over and above existing contracts to its Italian customers.

Three factors need to be taken into consideration where Italy’s future role as a gas hub is concerned: Algeria and Italy have links going back to 1960-1962, when the founder of the Italian ENI, Enrico Mattei, advised the Provisional Government of the Algeria Republic (GPRA) during the negotiations with General de Gaulle which led to independence. Second, Italy has depleted gas fields in the Po valley which would allow an ideal place to store gas, a priority for EU policy makers today. Finally, the feasibility study for a new pipeline linking eastern Algeria with the Italian port of Genoa, the GALSI, was drawn up at the beginning of the century.

Algeria’s attempt to raise its gas export game will depend as much if not more on the willingness of senior army brass to accept that they do not have the economic knowledge to fully understand the advantages the country might gain from the deglobalisation process currently under way. They need to throw open the government to the strategic views of a far broader spectrum of experienced and talented Algerians. Failing that, Algeria will miss an historic opportunity to modernise its economy and  enhance it’s regional role.

Summary: the fighting in Libya may have all but ended in 2022 but that may be the calm before a coming storm as contestation grows…

Summary: the fighting may have all but ended in 2022 but that may be the calm before a coming storm as Washington prepares to challenge…