Today we are pleased to bring you part 2 of our Arab Digest summer reading list, with all the books written by our newsletter and podcast contributors. From deep dive geopolitical analyses, to personal essays and reflections, from fiction to a delightful children’s book, it is a MENA festival of good reads. Enjoy!

This Arab is Queer edited by Elias Jahshan (Saqi) A collection of essays by LGBTQ+ Arab writers and a tour de force that presents with clarity and great courage the stories of 18 Arab writers who are breaking the silence about their sexuality. As Elias Jahshan writes in his introduction: “These writings assert our existence and agency as a community, and also celebrate our varied experiences. Here, readers will find stories of love and pride, heartbreak and empathy, courage and humour. This is a space where the microphone is entirely the writers’ own.” Elias has, with great skill and sensitivity, edited a book that is refreshing, provocative, challenging, disturbing,and amusing – all the elements that good art and good writing should be, and a book that is gutsy, really gutsy.

From Sheikhs to Sultanism by Christopher Davidson (Hurst) A highly readable book, rich in empirical detail, charting the rise of Abu Dhabi’s Mohammed bin Zayed and Saudi Arabia’s Mohammed bin Salman. As Christopher noted in our podcast, it has not always been a smooth ride: “Sultanism is often characterized by arbitrary or even rash decision making. After all, if you’ve got a very tight circle of advisers around you, and little room for consensus politics, sometimes policy failures are really dramatic and out of left field. And we’ve certainly seen this from both MbS and MbZ’s camps in the last few years, whether that’s various international and regional adventures they’d embarked on and had their fingers burned, whether it’s the Khashoggi assassination, or various other incidents, sometimes involving their Western security partners. Sometimes they get things wrong.” You can find the podcast here.

Loujain Dreams of Sunflowers by Uma Mishra-Newbery and Lina al-Hathloul (Penguin Random House) A beautifully told and illustrated (by Rebecca Green) children’s book that is inspired by the Saudi women’s rights activist Loujain al Hathloul. In our recent podcast her sister Lina said this about the book: “It’s difficult to explain to a child what we’re doing, and what Loujain was doing and what she is fighting for. And we decided to make it more magical, clear and simple. So the story is about a little girl named Loujain who lives in a world where only men can fly to a colourful world. But she questions when she sees her father. She always asks him why he can and she cannot, with her classmates as well, to the day where her father accepts that she wears her wings and goes to see the colourful worlds….A book is something that will last generations and I wanted to make sure that she’s not forgotten, and that her story lives throughout different  generations.” Lina’s podcast Testament of Courage is here. 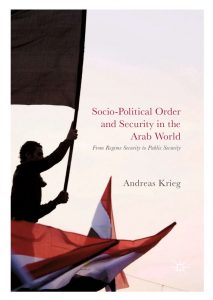 Socio-political order and security in the Arab World by Andreas Krieg (Palgrave Macmillan) His book explores and explains the crucial distinctions between liberalisation and democratisation and the importance of those distinctions when considering Middle East governance and Western hypocrisy in our dealings with authoritarian regimes. As he said in our recent AD podcast “Because we don’t care about what the UAE or Saudi do in the Middle East, we don’t care what they do to dissidents, we don’t care whether they kill journalists, we don’t care whether they commit war crimes or they use mercenaries, they infringe on all aspects of the liberal order on a constant basis. But because most people don’t really think there is an issue with that and also because the British government doesn’t seem to think there is an issue with that, business, obviously, takes its course.” You can find Andreas’ podcast here.

Twenty-First Century Jihad by Elisabeth Kendall (Bloomsbury Publishing PLC) From one of the foremost experts on Jihadism in the Persian Gulf, a book that examines the ways in which the concept of jihad has changed, from its roots in the Quran to its usage in current debate. This is a study that explores modern political angles, while touching on far less commonly analysed instances of jihad, incorporating issues of law, society, literature and military action. Twenty-First Century Jihad contains vital analysis showing how jihad has shaped international politics and security concerns in the modern world. You can find Elisabeth’s most recent podcast Al Qaeda in the Arabian Peninsula: down but not out here.

Energy Kingdoms by Jim Krane (Columbia University Press) In a review for the Middle East Institute Robert Looney had this to say: “Every once in a while, a volume appears that explains the need for a paradigm shift in our thinking as to the way the world works. Jim Krane’s Energy Kingdoms, which assesses the rentier state model as applied in the Gulf context, is such a volume.” Jim, a former journalist with long experience in the Gulf states, brings to all his books an acute and accessible writing style that makes them highly readable. His AD podcast conversations mirror that style. You can find Jim’s most recent one, Net zero chasing in the Gulf, here.

Digital Authoritarianism in the Middle East by Marc Owen Jones (Hurst) From a leading expert of the dark world of digital deception and disinformation comes a startling and disturbing assessment of the role authoritarian regimes in MENA are playing in information warfare. Social media has been weaponised by states and commercial entities alike, as bots and trolls proliferate and users are left to navigate an infodemic of fake news and disinformation. In the Persian Gulf and the wider Middle East, where authoritarian rulers continue to innovate and adapt in the face of changing technology, online deception has reached new levels of audacity. You can find Marc’s AD podcast here.

Summary: the business and sectarian elites that rule Lebanon, aided and abetted by Iran and Syria, are behaving with predictable selfishness.

Summary: Tunisians were not impressed with La Francophonie, a summit that celebrated the French connection but did little to help ordinary people so when Tunisia’s…