Summary: Mohammed bin Salman wins kudos for reforming the Saudi economy and opening the kingdom to Western values but a fair and transparent judicial system is not among those values.

Dr Saud al-Sarhan is a highly respected Saudi academic. He was, until May of last year the secretary general of the King Faisal Center for Research and Islamic Studies (KFCRIS) and in that capacity supervised the centre’s research department. He is a Senior Honorary Research Fellow in the College of Social Sciences and International Studies, Exeter University, as well as a Distinguished International Affairs Fellow of the National Council on US-Arab Relations. An Associate Fellow at the International Centre for the Study of Radicalisation (ICSR) at King’s College London he is author of Political Quietism in Islam: Sunni and Shi’i Practice and Thought.

At the end of October this distinguished scholar “disappeared into the abyss,” as a former British diplomat familiar with the kingdom put it. Friends and colleagues in the West are increasingly concerned for his well-being and with good cause. The London-based Saudi human rights organisation ALQST released a statement on 7 December that said it had learned through private channels that Saudi authorities were holding him in what it called “a state of enforced disappearance” and it confirmed 21 April to Arab Digest that al-Sarhan continues to be held in an unknown place. No reasons have been given for his detention and the family, out of fear of reprisals, is not talking. It is not known if he has been allowed contact with them. 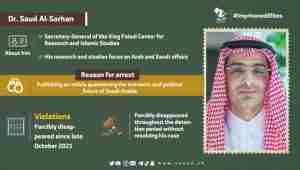 ALQST postulates that an article the academic wrote about Mohammed bin Salman’s Vision 2030 project may have triggered the crown prince’s ire:

Al-Sarhan had published an article on the future economic and political direction of Saudi Arabia under Crown Prince Mohammed bin Salman, in which he acknowledged having previously harboured strong doubts. As soon as the crown prince’s disgraced former adviser Saud al-Qahtani re-emerged on the political scene this autumn, the order went out for al-Sarhan’s arrest…. Disappearances can last a very long time, raising concerns for the safety and even lives of the victims. Sometimes a small amount of information is released after even long periods of disappearance, only for the victims to be denied any further contact with the outside world.

Enforced disappearance and long periods of silence is the modus operandi of the Saudi state security apparatus. Those who are taken are invariably tortured and forced into making false confessions before being brought to trial and summarily convicted and given long jail terms and in some cases the death penalty.

The situation that al-Sarhan is facing is disturbingly similar to that of the young aid worker Abdulrahman al-Sadhan. He was disappeared in March 2018 and for almost two years his family heard nothing. Their desperate attempts to get any information about him were turned aside by the authorities.  Then finally in February 2020 his father received a phone call that lasted for one minute. His sister Areej, an American citizen living outside of the kingdom, said at the time: “My family could tell from his tone that he didn’t want to scare us; he’s always thinking about others, about protecting others. Then a voice in the background said ‘Your minute is up’ and the phone line went dead.”

His crime was to anonymously tweet criticisms of the MbS regime. Two spies hired by Twitter but working for Saudi state security revealed al-Sardan’s identity to Saud al-Qahtani triggering the arrest. He was tortured, brought before the Specialized Criminal Court and his false confession was used to sentence him to 20 years in prison, followed by a 20 year travel ban.

Commenting on the case and the broader use of the courts as a tool of repression Amnesty International  had this to say:

(Our) research shows that through the Specialized Criminal Court, which was initially set up as an anti-terror court, peaceful activists, religious clerics and members of the Shi’a minority are often subjected to grossly unfair trials, given lengthy prison sentences, and even sentenced to death based on so-called “confessions” that are extracted under torture. Several individuals have already been executed. This court is one of the Saudi Arabian state’s most powerful tools for muzzling critical voices in Saudi Arabia.

But in the state of fear that Mohammed bin Salman has relentlessly constructed, no one is safe.  That point was underlined with the report that at least nine judges have been arrested and are being threatened with  the charge of having committed high treason. If convicted they could face the death penalty. Among the judges, all of whom are said to have shown complete loyalty to the crown prince, are Abdullah bin Khalid al-Luhaidan and Abdulaziz bin Medawi al-Jaber. Al-Luhaidan presided over the trial and conviction of the women’s rights activist Loujain Alhathloul (see our podcasts of 22 February 2021 and 21 February 2022) while al-Jaber was among the judges who passed death sentences on the 81 who were executed days before the British prime minister Boris Johnson met with the crown prince in Riyadh. Among those al-Jaber had sentenced to death was a minor.

Now in a Stalinesque pivot these judges find themselves at risk of execution. It may simply be the capricious and cruel nature of Mohammed bin Salman that causes him to turn on allies. A Saudi dissident told Arab Digest that “everyone is at risk.” The dissident added  “the judges did whatever MbS wanted them to do to spread fear,” but it wasn’t enough. Even loyal henchmen like Saud al-Qahtani and Ahmed al-Asiri  – both heavily implicated in the murder of the journalist  Jamal Khashoggi acting, it is believed, on orders from the prince – may find themselves looking over their shoulders.

Or there may be method to the madness. As a long time Saudi watcher put it “The logic to their (the judges) arrests is MbS is looking both ways, like Janus: on the one hand, a despot executing people, on the other, a liberal appealing to the younger generation. Saudi Arabia has always had contradictory sides. This is another one. I can well imagine how he said ‘get rid of them’ and then ‘ma sha allah, we can’t have judges executing this number. What will the world say?’”

Summary: with the appointment of the boss of the UAE’s national oil company to head up COP28, critics say it’s a sell out to big…